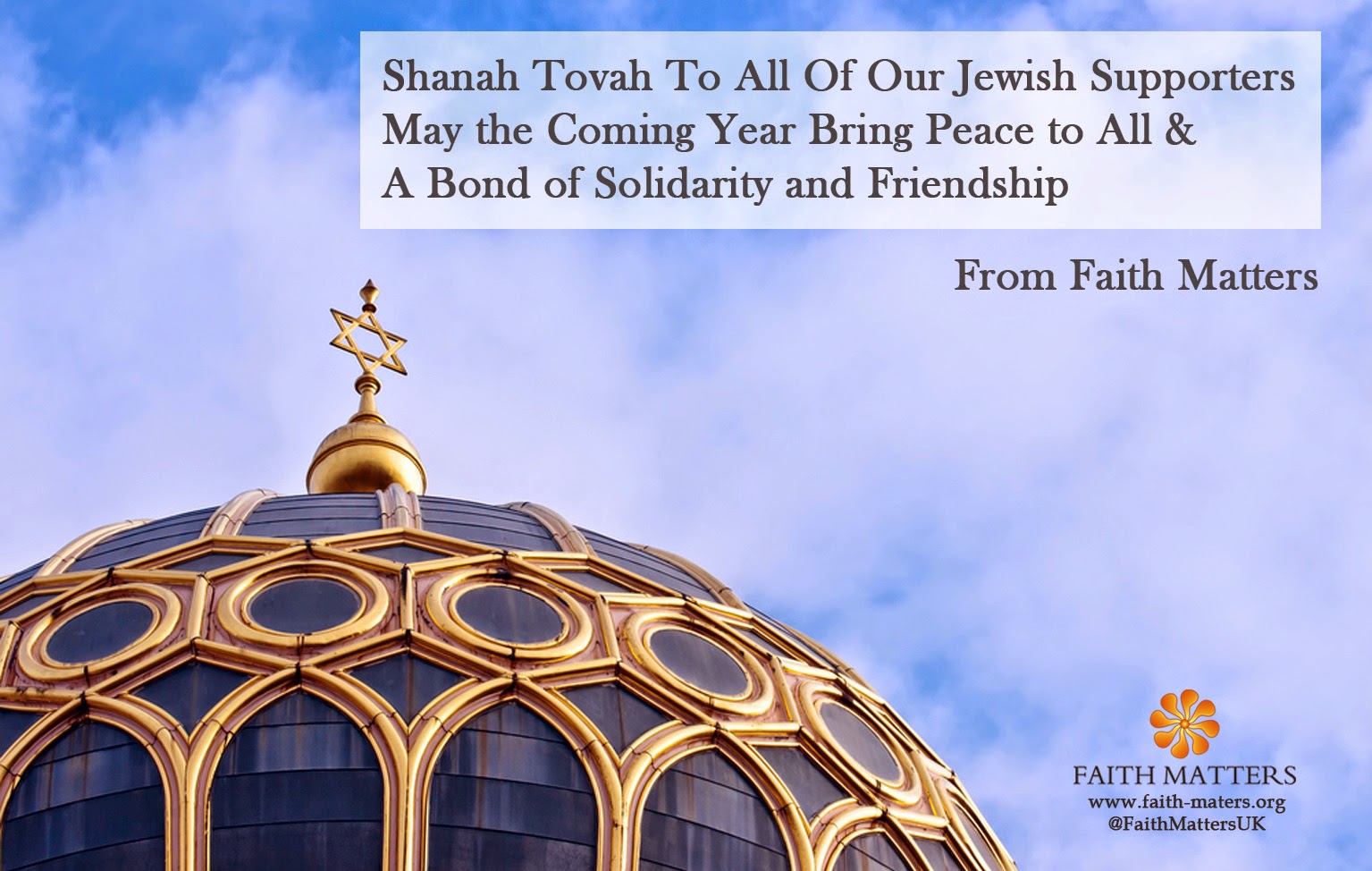 Foundations In Europe that work on Religious Diversity and Tolerance.

Not long ago Ceji published A Muslims Persepective on Rosh Hashana By Fiyaz Mughal, Of Faith Matters.  In it Mughal writes: “it is clear to me that Judaism pushes the boundaries on the good that a person can achieve and attain for the whole community.” and also  “So, this Rosh Hashanah, may I call upon all of those who read this blog, to take some time out to find out more about the High Holy Days. Don’t just be bystanders as you see people walking to the synagogue. Engage and enquire, but most of all see in those walking to the synagogue, a thousand blessings for us all. ” He also talks bout Yom Hadim, Judgement day, that seeks through balances to indentify a goodness among nations. That goodness cannot be taken for granted by any nation. Any Nation. Period.

A Muslim’s Perspective on Rosh Hashanah

Rosh Hashanah or the Jewish New Year is fast approaching in the coming week and is also known as the Feast of Trumpets. It commemorates the anniversary of the creation of Adam and Eve and celebrates the miracle of life and the creation of life and also Rosh Hashanah is also known as Yom Hadin, the Judgement Day. It is therefore a time for reflection on life and for a balance of the deeds that each person has undertaken. Allied so closely to this religiously significant event is the balance between good and evil deeds, between life and a balance in the bank of good deeds and between death and the potential to also do evil. These are intricate relationships that make up the High Holy days and which are fascinating.
Whilst I know little if anything about the tradition of such deeply moving religious events, it is important I believe, for people who are not Jewish to reflect on the symbolism of Judaism. Self reflection and understanding the rich tradition of Judaism is something that has personally enriched my understanding of Islam and my empathy with other people and communities. It is a gift that must be celebrated since it unlocks a greater understanding of how we are intricately linked.

Rosh Hashanah translates itself to me to be a celebration of the continued existence of Jewish communities on this earth, an existence which has many times been challenged. It celebrates the very meaning of life which has, at times, been questioned by those within Jewish communities who have been persecuted, abused and murdered. Yet, through all of these trials and tribulations, the light of Rosh Hashanah and Jewish communities have survived, like a candle that has remained lit through sharp winds that should have extinguished the flame. For me, this also translates into the incalculable will of the human spirit to survive, yet for someone who believes in God as I do, it also demonstrates a higher protection that has at times gone against the grain of anything rational or logical. Take for example, a young Jewish girl who was not supposed to survive the brutality of the Nazis, yet who outlived others who were physically and mentally stronger.

Rosh Hashana is also the day of “Yom Hadin”, known as Judgment day. Again, the balance of deeds plays a part in the process, a system of judgement, one element of which is based on the righteous amongst nations. Having come across this term in Yad Vashem for those non-Jews who saved Jews in the Holocaust, (of which there are about 70 Muslim Righteous Amongst Nations), it is clear to me that Judaism pushes the boundaries on the good that a person can achieve and attain for the whole community. This is inspiring stuff, it connects the pit of the stomach, our emotional core to the Almighty through a direct link. It talks to me about selflessness, about morality, about the dignity of the whole community and the ability for a single person to make a change to enhance the lives of others.

What is also interesting is the ‘earthiness’ and connection with the earth through food that is such an intricate part of the High Holy days. Apples and honey and pomegranates symbolise rebirth and sweetness and a rich bounty for the forthcoming year. For a race and religion who for thousands of years have lived knowing that they could be on the move at any point because of the politics of rulers who saw them as ‘easy prey,’ this symbolism of food must have taken on a much greater meaning. Not only was it associated with life, it was also associated with beauty, enrichment and a blessing for the whole community and not just individuals. This connection continues and I am always amazed when I sit with Jewish communities about the relevance of food and how it is the power that not only charges the biology of individuals, it also recharges the spirit of all those round the table.
So, this Rosh Hashanah, may I call upon all of those who read this blog, to take some time out to find out more about the High Holy Days. Don’t just be bystanders as you see people walking to the synagogue. Engage and enquire, but most of all see in those walking to the synagogue, a thousand blessings for us all.